Archaeologists digging in the Centro district of Mexico City unearthed more than expected when they discovered the hidden ruins of an ancient Aztec dwelling, which had apparently been occupied for many generations both before and after the Spanish conquest. Experts from the National Institute of Anthropology and History of Mexico (INAH), which sponsored the excavations, believe that the residential building was probably built during the late Postclassic period of the Aztec Empire, which covered the years from 1200 to 1521 AD.

This revealing discovery was both fortunate and extraordinary, because archaeologists were not looking for Aztec ruins. Their excavations were ordered as a precaution, in anticipation of a project to build an electrical substation which could damage undiscovered underground ruins.

Nevertheless, archaeologists exploring the underground regions of Mexico City are always hoping that something interesting might turn up. The current capital of Mexico was built directly above the spectacular capital of the Aztec Empire, Tenochtitlan, which means that Aztec ruins could possibly be discovered during any excavation.

A modest Aztec house, and much more

The Aztec dwelling found by INAH archaeologists is modest in size, with a total footprint of around 4,300 square feet (400 square meters). It was made from adobe (sun-dried clay brick), as was the custom in the Aztec culture. Based on an exploration of the surrounding area, it appears that the adobe house was located on the border of two residential neighborhoods, in a city that may have hosted as many as 400,000 people during its most populated phase.

While digging under the thick floors of the building, archaeologists found two burial vessels containing the skeletal remains of two children. They also found several other burials, as well as a mixture of grave goods including spinning tools and an Aztec spindle whorl believed to have been used by experienced clothing makers. 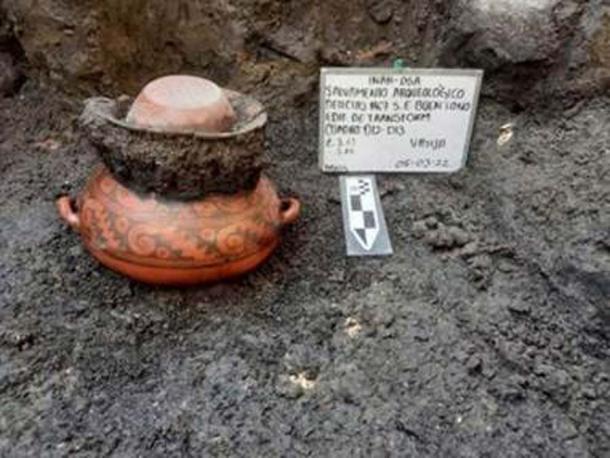 One of the funerary urns found at the Mexico City site. ( INAH)

These latter objects were probably the property of people who lived in the dwelling and who were buried under it when they died. It is also possible that the structure was built over an ancient Aztec burial ground, either intentionally or accidentally.

In addition to textile manufacturing, other crafts would have taken place on the site of the former dwelling. INAH archaeologists unearthed artefacts suggesting that the structure had at one time been turned into a ceramic pottery and saddlery workshop, the latter of which refers to an operation that produced materials used by riders. Archaeologists believe these activities were undertaken on behalf of the Spanish occupiers during the colonial era of the 16th and 17th centuries.

While digging in and around the residential structure, archaeologists also uncovered a most unique feature. It was a stone statue nearly two feet (60 centimeters) tall of a man in a loincloth (an athlete?) apparently throwing some type of object. The decorative statue was unpolished, indicating that its creator had been interrupted and could not complete his work for some reason. Researchers speculate that the sculptor would have worked on this statue at the time of the Spanish conquest, and may have hidden it quickly to prevent it from falling into the wrong hands. 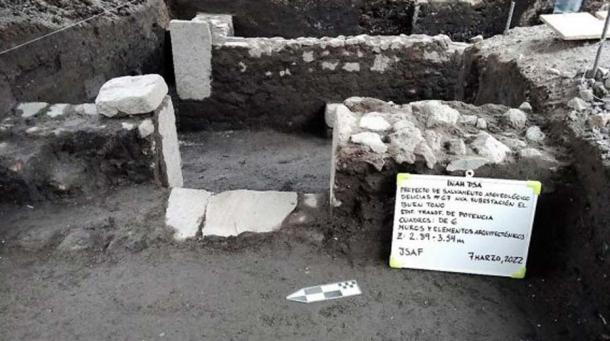 Part of the adobe building. ( INAH)

During the late Postclassic period of the Aztec Empire, the area where the recent excavations took place served as both a residential area and an agricultural center. The INAH archaeologists know this because in addition to the adobe dwelling, they also found remains of several canals or canals that would have been traveled by boats. They also unearthed an ancient example of a pier, a platform where boats can stop to load or unload goods.

The canals and pier would have been installed to meet the needs of Aztec farmers using the chinampa method of growing plants. Practitioners of this innovative style of Aztec agriculture cultivated small floating gardens or islands created on the calm waters of shallow lakes or ponds easily accessible by boat.

Curiously, INAH archaeologists have found evidence to suggest that the site of the Aztec habitation was still in use three centuries after the fall of the Aztec Empire.

According to archaeologist Alicia Bracamontes Cruz, she and the other researchers discovered remains of what appears to have been a public bathhouse, which was thought to have been installed in the 19th century. These remains included bathroom-style tiled floors and a water drainage system. This type of public bath would have been reserved for the use of wealthy elites and would not have been open to the general public.

Resurrecting Aztec culture, one excavation at a time

There is still a lot of excavation work to be done to prepare for the construction of the new electrical substations. INAH archaeologists are optimistic that more Aztec-era ruins and artifacts will be uncovered, which seems like a realistic hope given what has already been uncovered.

Much was lost when Spanish conquerors invaded and ultimately destroyed the Aztec Empire and its densely populated, culturally sophisticated, and stunningly beautiful capital, Tenochtitlan. But archaeologists specialize in resurrecting lost worlds, as the latest series of excavations at the site of ancient Tenochtitlan have already demonstrated.

Top image: Excavated walls of the Aztec house and one of the burial vessels. Source: INAH